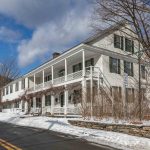 Grace Cottage was recently notified that Gundela Weindl made a generous bequest to Grace Cottage.

The former owner, with her husband, Eric, of The Newfane Inn, Gundi died on January 11, 2020, eight years after Eric’s death.

Born in Lutterhausen, Germany, Gundi moved to the U.S. in 1963, where she met, Eric, Chef at the Stratton Mountain Inn. They married in 1968 and, together, ran a restaurant at the Avalanche Lodge in Manchester, VT. In 1970, they became the proprietors of the Old Newfane Inn (then owned by Christoph Stumpe Castou), and they owned and operated the inn and restaurant from 1978-2011.

Eric and Gundi were well known to generations of families in this area and all over the world, and are greatly missed, but their generosity to Grace Cottage leaves an important legacy.