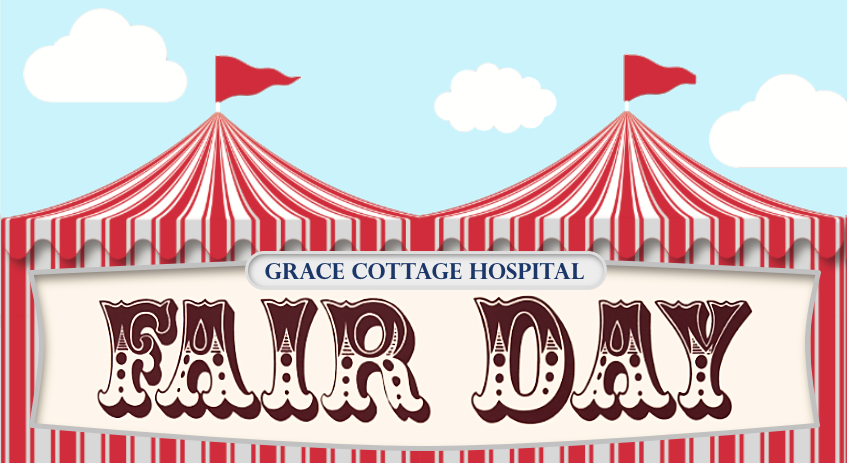 Thanks to generous and enthusiastic fairgoers and more than 185 volunteers who donated a total of 2,700 volunteer hours throughout the year, the 72nd Annual Grace Cottage Hospital Fair Day was a great success!

On Saturday, August 6, hundreds of local community members and visitors gathered on the Townshend Common and enjoyed the many treats and delicious food options; bid in the auction; purchased household items, books and plants; listened to music; took a chance in the raffle; showed off their face paint; rode ponies; “fished”; and played countless games of Bingo. The highlight, though, was being together again, greeting old and new friends and family.

A record $105,000 was raised which, after Fair Day expenses, will be put towards the much-needed expansion of Grace Cottage’s Emergency Department. Construction of the 17×42-ft expansion will greatly improve patient privacy and security, and is expected to begin in October, to be completed in early 2023.

On behalf of all the patients that Grace Cottage serves, thank you to everyone who helped to make Hospital Fair Day the best ever.  This small, independent rural hospital wouldn’t exist without your support.

We would like to say a special thank you to our new-to-us volunteer auctioneer, Brian Tebo, from Bennington. Longtime Hospital Fair Day auctioneer Kit Martin is living in Maine, and he has wholeheartedly recommended Brian to replace him. And thank you to Kit, who came to the Fair this year and took over the bidding process several times when Brian needed a break. In addition, we are grateful to Ralph Sherman & Friends, who brought their wonderful music to entertain us. Also, thank you to all of the Booth Chairs and their volunteer helpers.

Here’s a list of our Booth Chairs, who so ably led their groups of volunteers. And thank you to Hospital Fair Day Chair Eileen Fahey.

A tradition began 72 years ago, and it has been vital to Grace Cottage’s patient care ever since. The first Hospital Fair Day was held on Saturday, August 5, 1950, organized by the Grace Cottage Hospital Auxiliary, with a healthy mix of fun, fellowship, and fundraising. Thanks to the love, loyalty, and dedication of so many volunteers and fairgoers over the years, this event continues. Grace Cottage relies on the proceeds from this annual event, which now average $50,000 each year.

In the photo albums below, you can reminisce about past Hospital Fair Days and see some of the babies born here across the years.

Links below also take you to traditional Fair Day recipes and fun Fair-Day-themed coloring pages, a relaxing activity for both you or your child.

Thank you for continuing to support the Annual Grace Cottage Hospital Fair Day!

If you were born at Grace Cottage, send us a current picture and tell us your birth year, and we’ll add you to our virtual Birthday Baby Parade with our beloved Stork (don’t tell anyone, but it’s Dr. Timothy Shafer!)

Roll over the photo to see the name and year. Use right and left arrows to scroll through the photos.

Linda Wolf, born at Grace Cottage in 1954, with her mom, Dot Brooks Masengale

Get your crayons out — it’s coloring time. Click on any of the special Hospital Fair Day coloring pages below, and print the page to color offline.

We want to reminisce with you. We’re posting videos and photos of past Fairs. If you have photos or videos from past Hospital Fair Days that you’d like to share, e-mail them to info@gracecottage.org, and we’ll add them to the album.