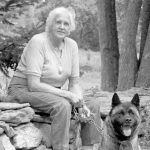 We are blessed by tremendous number of people who have remembered the hospital in their wills and estate planning over the past 70 years, including Eris Howe, who recently left a bequest to Grace Cottage. As Eris’s obituary noted, she was “a native Vermonter and a woman with a fiercely independent spirit…a lifelong resident of the West River Valley, living by herself for many years at the Howe family homestead on Windham Hill Road in West Townshend.” Eris died on October 23 at age 90.

Over the span of many decades, Eris worked at American Optical in Brattleboro, Gleason’s Store in East Jamaica, delivered the mail in West Townshend, Townshend, and then Jamaica, and was a bookkeeper and office clerk for Kearley Fuel/Barrows Coal in Jamaica. She was active in the Order of the Eastern Star, Mount Lebanon Chapter #89, and sang with the West River Valley Chorus.

Eris loved her animals, including her dogs, cats, and horses, over the years. On horseback, she rode the hills near her home to pick blueberries during the summer, which were often used in desserts, muffins, and pancakes at the Dam Diner. In her spare time, she built stone walls, tapped and boiled maple syrup, played the piano, and enjoyed crossword puzzles and games of cards. Her “can-do” attitude was inspirational to all who knew her.